In music and literature, the word “road” abounds. From “Hit the Road Jack” to “Thunder Road” and from “Goodbye Yellow Brick Road” to “King of the Road”. “The Long and Winding Road” was, of course, recorded at the famous Abbey Road Studios, in front of which the Beatles marched along that famous Abbey Road crosswalk. An electrical charge still fills me every time I hear Eric Clapton’s magisterial guitar solo from his cover of Robert Johnson’s “The Crossroads”. (I’m quite certain that neither genius sold his soul to the devil for his musical ability.) And while Willie Nelson sang a bitter-sweet “On the Road Again,” in “The Red Dirt Road” Brooks & Dunn celebrated their iconographic Mary on that roadside pickin' blackberries.

In literature, Jack London and Cormac McCarthy both published novels titled The Road. V.S. Naipaul wrote about A Bend in the Road and, in his debut novel Revolutionary Road, Richard Yates wrote about stifling suburban life in 1950. Many poems contain important roads, especially “The Road Not Taken,” which we analyzed to death in school, and Whitman’s “Song of the Open Road,” which celebrates (as all great art does) the wisdom of the soul. Personally, I’ve always loved G.K. Chesterton’s “The Rolling English Road,” which rejoices in...

"The rolling English drunkard [who] made the rolling English road.
A reeling road, a rolling road, that rambles round the shire,
And after him the parson ran, the sexton and the squire;
A merry road, a mazy road, and such as we did tread
The night we went to Birmingham by way of Beachy Head."

Given the artistic legacy and metaphoric importance of these great roads, for the artists and friends who come to Dorland, there’s only one important road: Martha Minkler Way, that quarter-mile, 10-percent grade up from Highway 79 and into the awaiting tranquility of the Dorland cottages.

[road] There’s something you might have noticed, though. The beautiful Martha Minkler Way was last paved over ten years ago and is currently in a state of distress, with some potting and cracks that, left untreated, will widen and eventually break off, making the road impassable and compounding the expense of repairing.

To ensure the comfort and safety of everyone who visits our sacred land, the Dorland board has launched an effort to repair this road, culminating in resurfacing its entire length. From two reputable contractors, we have secured bids for this work. The bids range from $22,000 to $24,000. With other improvements and unexpected costs, we anticipate that this project will cost $28,000.

For this integral project, we have already received a "challenge" gift of $5,000 from the same man who funded our well a few years ago. Another special friend has pledged $4,000 toward this effort. We also believe that a private foundation will be gifting $12,500 in matching funds. These three gifts take us a long way toward our $28,000 goal, turbocharging our efforts to rebuild Martha Minkler Way.

And that’s why I’m writing to you today. Can you help us raise crucial, last-quarter-mile funding to repair our only lifeline to the outside world?  Would you consider supporting this effort with a gift of $1,000, $500, $250, $100 or $50? It would be so wonderful to have you join us in this important capital project. 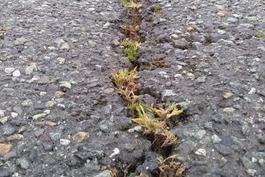 
I know how much Dorland has done for the wisdom of my soul, and I hope that your soul’s wisdom has been touched at Dorland as well.  With your help, the road that reels, rolls, and rambles around the shire of Dorland will be repaired, slurried, and returned to the pristine condition that we celebrated upon its dedication.

We are deeply honored that you would consider supporting this project, which is a bedrock milestone in our efforts to maintain the integrity of everything we have literally built and metaphorically constructed at Dorland. That you would lend a hand in this magnificent effort stands as a moment in time for the magical place on the hill that was founded so many years ago.

Thank you from our hearts and spirits.

It's a "Long and Winding Road"

...in need of major repairs!

A Magical Place on the Hill